When you think of rubies you may envision Queen Elizabeth’s tiara or Dorothy’s slippers from the Wizard of Oz- but many people are now choosing them as the center stones for their unique ruby engagement rings! The deep red colored gems have been used for centuries by royalty to guarantee success in love, health, and fortune. Queen Elizabeth is often seen wearing her Ruby Tiara, which she had custom-made with the 96 rubies that were a wedding gift from the people of Burma. In Burmese culture, rubies are thought to ward off illness and evil- gifting them is a symbolic gesture to protect the wearer from the 96 diseases that they believe can afflict humans. The rubies on Queen Elizabeth’s tiara seem to be working pretty well because the Queen celebrated her 95th birthday this past April in good health!

In gemology, only four gems qualify for the elite category of “Precious Gems''- diamonds, sapphires, emeralds, and of course, rubies. Differentiating the ruby from spinel (a similar looking gemstone) is what actually gave birth to the science of gemology! The famous UK imperial state crown was believed to have ruby as the showstopper center stone for many years, but it’s actually a spinel! There are more examples like this and we now know that some of the world’s most famous “rubies” are actually spinels. Throughout history, many cultures have considered the ruby as a stone of kings and in the ancient language of Sanskrit, ruby is called ratnaraj, or “king of precious stones.” Like diamonds, rubies have accumulated a variety of meanings over the centuries. In India, people believed that rubies enabled you to live in peace with enemies, and in Myanmar (once called Burma), warriors possessed rubies to make themselves invincible in battle. The warriors even went as far as to insert the rubies into their flesh and make them part of their bodies for extra power.

Ruby kept its importance through time and became one of the most sought-after gems in European upper class. We now see it trending for engagement rings- like the gorgeous three-stone ring Jessica Simpson wears. Born in July, Jessica chose her birthstone for her engagement ring, but we have a few more reasons to stare at this bedazzling stone and add it to your wishlist. Below, we go through a few of our many reasons, and then jump into our favorite products you should consider purchasing for yourself or a loved one! 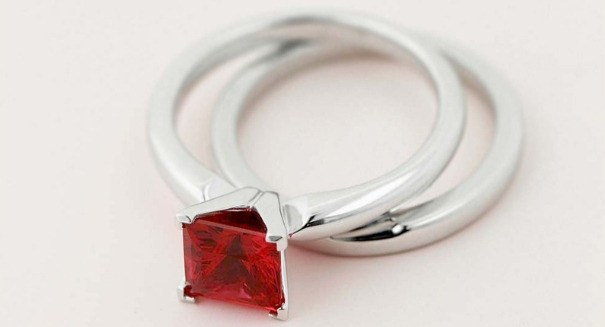 Rubies have a hardness of 9 on the Mohs’ scale, making them a hard, long-lasting gemstone. They only just fall behind the diamond, which scores a perfect 10. Thanks to its hardness, you can wear a ruby ring or pair of ruby earrings knowing they are durable and will last. Rubies are a variety of corundum, a crystal made of aluminum oxide and the ruby’s color is due to the presence of chromium. High-quality rubies are a transparent, vibrant, purplish-red. The highest quality mined rubies are usually from Myanmar, and can actually be as valuable as diamonds, or even more so, which is why lab-grown is not only an ethical choice, it’s also more affordable.

Europeans throughout history have worn rubies to guarantee health, wealth, wisdom, and success in love. Given they were often worn by royalty, it’s not surprising rubies are associated with power and wealth. Rubies were valuable to Chinese noblemen too and it is said that they buried rubies beneath the foundations of buildings to bring success. We all could use a little luck in the beginning of our marriages which is exactly why we think you should pop the question using a ruby!

Ruby is the July birthstone, which means July babies have one of the world’s most treasured gems as their signature stone. If you are a Leo or Cancer you may also consider rocking this gem. Both July star signs are known for their love and passion- symbolic to the ruby.

4. Rubies are the gemstone of passion

Due to the deep red color, rubies are often associated with romance and passion making them the perfect gift for Valentine’s Day or an anniversary. Ruby is traditionally the gemstone to be given on the 15th and 40th wedding anniversaries. We say break traditions and get down on one knee with a ruby in hand. Let this durable gemstone bring success in love and health to your fiancé-to-be.

Like diamonds, there is a lot of conflict involved with the mining and distribution of rubies. Myanmar supplies many of the world's rubies, 80% in fact! According to multiple industry experts, most of Myanmar’s Burmese rubies and sapphires are smuggled into Thailand to be cut and sold on the international market. Purchasing an earth-mined ruby means there is a possibility you are helping fund genocide. Luckily, no one has to suffer because we can grow stunning rubies in the safety of a lab. When you purchase a Lab Grown Ruby you are getting the highest quality, most gorgeous option, and at a fraction of the cost.

Now that we’ve piqued your interest in lab-grown rubies, how about some inspiration so you can envision how these regal gemstones will look in some of our most popular styles. 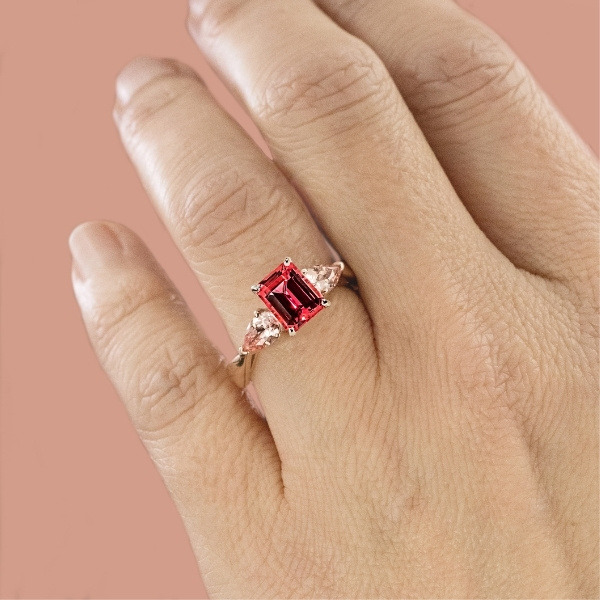 The Jessica holds your ruby center stone accented with a unique pair of pear cut side stones in a basket setting. Three-stone rings represent the past, present, and future, symbolizing the ever-growing nature of your love. 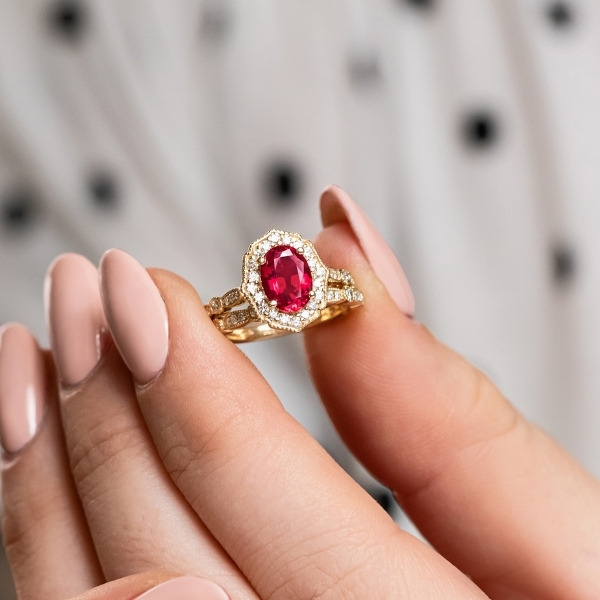 Feel like royalty with this vintage style. The Paris features a beautiful antique halo design with recycled diamonds accenting the shank. We hope you build your Paris vintage wedding set with ruby for an elegant touch! 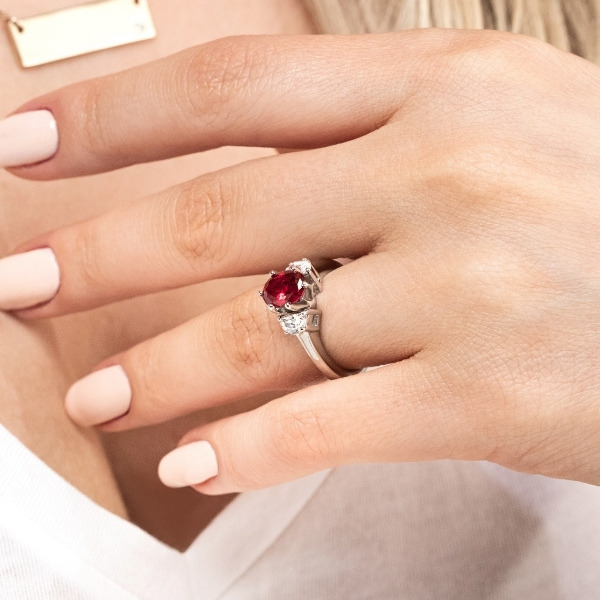 The gorgeous Celestial is accented with half moon side stones on a smooth rounded shank. This style makes the center stone really pop and our favorite gem choice for this setting is the Ruby! 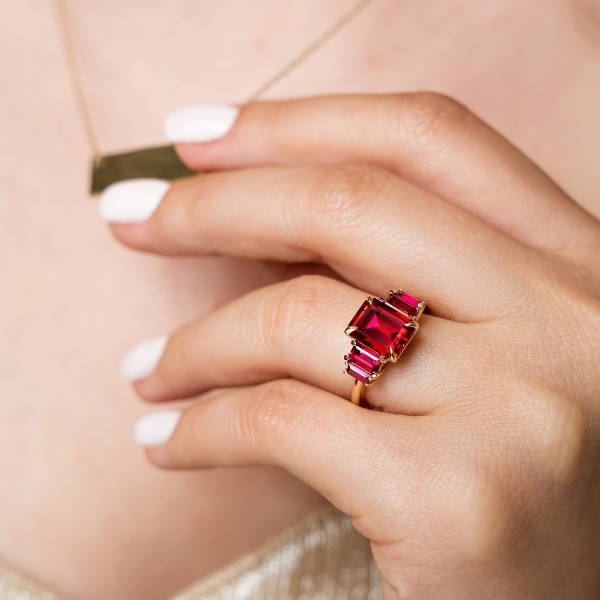 Get creative and design your own engagement ring! Whatever you dream, we can create. Have rubies on your mind? Browse different styles as inspiration and work with our designers to create your dream engagement ring.

Design your own ring! 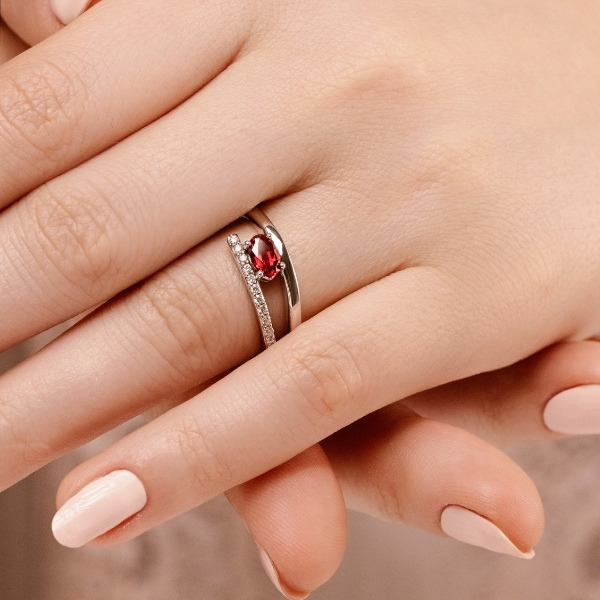 This unique style is set with a 0.60ct Lab Grown Ruby and accented with Lab Grown Diamonds in 10K white gold. This ring is size 6.75, but can be resized to fit you or your loved one!

Accented Split Ring: On sale for $684 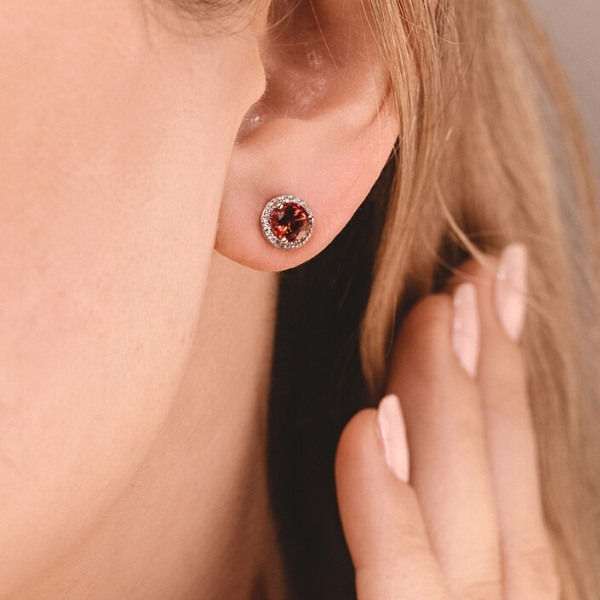 These exquisite earrings feature your choice of center stones (and we are hoping you go with ruby), surrounded by a stunning halo of Lab Grown Diamonds. These are perfect for a romantic evening out on the town!

Ready to add some rubies into your life? We thought so. If you don’t see a style above that you love, don't worry! You can build any of our jewelry with a lab grown ruby as the choice of your center stone! Rubies also look good with all metal types. In white gold, rubies look sleek and sophisticated whereas in yellow gold they will create a warm and unique piece. Ruby with rose gold creates a feminine and romantic statement. You simply can’t go wrong with a ruby- so click your heels and take one of these precious gemstones home.

Treat Yourself & Your Friends This Galentine’s Day

This Galentine's Day is all about you and your friends. Learn more and consider a gift for yourself or a loved one.

Get the details on MGK's proposal to Megan Fox, see the custom designed ring he had made and explore making a custom ring of your very own.
Trustpilot